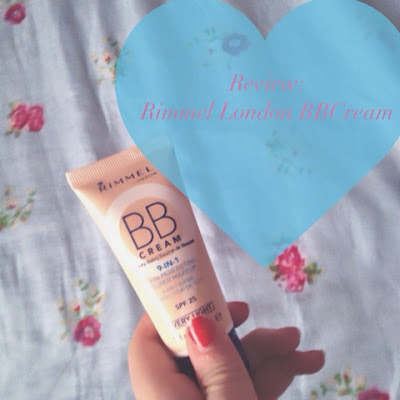 Hello, so today's post s going to be my first ever review on it is on the Rimmel London BB Cream. I purchased this the other week and I have been using it none stop. The reason I bought this was because I got a little sample packet thing in Company the other month and I tried it out, and it was very high coverage and I really liked it however it was light and it was still too dark for me. I wanted to purchase a tube of this, however I was worried that they would not ave a lighter one as the one I tried was in light. But luckily enough they do it in very light, light, medium and dark (i think) so I got it is very light. o the next morning when I went to put it on, I started panicking, for two reasons, one because if it was too dark what was I suppose to do because it was a school morning what meant I had no tie to waste. And two was that it would not cover up as much as the "light" one as it was closer to my skin tone and that all my spots and veins would show through however it did cover them up. I have a weird skin tone, because I have light brown hair and dark eyebrows but my skin tone is super light and pale and also I say my skin is "thin" what I mean by that is you can see all my veins very clearly, especially i my face, so when I wear make up and foundation  it has to be the right shade.
I really recommend this bb cream as I has a matt finish what means it does not make you look like you have oily skin. It also conceals so it is like a foundation, concealer and a moustriser in one (maybe that is why it is called 9 in 1). The only thing I would say about this product is that if you are normally a medium skin tone in foundation I would go down to light and light go down to very light and the same with dark go down to medium, just because I fell like they are a bit darker than expected.
That is for now, hope you liked my first review.
Love
Ailish Elizabeth
xx