My hair is all gone, well not all of it just most.
I went back to having my hair short this week and I love it so much.

If you have been reading my blog for a few years, you will know that I did a post like this around 2 years and it is one of my most popular posts, so I thought I would do another one like it, sharing my new hair.

Since I got my hair cut short last time, I have wanted to go shorter and get it cut short again but in the two and a half years I have not went shorter or back to that length at all, and I don't know why.
When I got it cut last time the main reason I did was because I loved the look of short hair and I just wanted something different, however this time the main reason I wanted it cut short was because I hated having long hair and my hair was just too long for me personally and I have wanted to get it cut for so long.
But, I didn't get it cut until now for one main reason and that is because I had prom and I wanted my hair long for that so I could have it up but after prom there was no need or desire for me to have long hair and I actually really hated it. 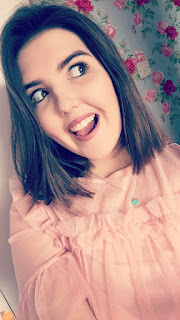 My hair was super long and I think it was longer than when I got it cut short last time, it went all the way down my back and I think it could have touched my jeans, I cannot fully remember. I always wore my hair straight so that made it seem longer too but even when it was curled it was still long. The other week actually, before I finished school, I had my hair curled and in a high pony because that is how I wore it a lot for exams. Even though it was high and curled a girl in my class stopped me and told me she didn't realise how long my hair was because it was curled in a high pony at the top of my head and it still reached the top of my school skirt.

Obviously, I didn't need to get my hair cut this short for it to be healthy as it was just a bit at the end which was dead and still after that my hair was long and it was still past my boobs, but I just couldn't cope with long hair for much longer.
My hair now is just above my shoulder and the night before getting it cut I told my parents and sister that I probably was just going to get it cut to my shoulder, but just a bit below. But, the night before I was going through my instagram and was looking at people's hair, mainly Nina Nesbitt, Lucy Hale and Bella Fiori and they all have short hair which is around chin length and shoulder length and obviously I didn't want to go super short I did want to go shorter, so I went in between.

The first time I got my hair cut I was nervous and I was worried about getting cut and I got a lot cut off the first time, however this time I wasn't really worried about it and I had been waiting to get it cut for ages so I was more looking forward to getting it cut than I was worried about it. When I went to get it cut and I told the hairdresser how short/ how much hair I wanted off she did check with me a few times that I wanted that much cut off and I was adamant I wanted it all cut off and I don't regret it at all.

I love my hair short so much. My hair feels and looks so healthy now and it isn't heavy which I think sounds weird but when you get your haircut short your head just feels so much lighter and you don't realise how heavy your old hair was.
I feel like in the short time I have had my hair short I have done so many hairstyles with it and I love them all like I feel like I can do anything with my hair this length and I would love it. 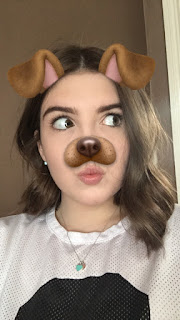 Firstly, I curled my hair the afternoon I got my hair cut as I had it cut a 9am I felt like I had it cut forever by the afternoon. I used my Babyliss Wave Wand (I think it is called that or something) and it does more soft big curls and I used it all the time on my long so I thought it would look really nice with short hair.
It did look nice, however I will need to practise curling it because it was slightly hard to do the back bottom layer as my hair is obviously a lot shorter than normal so was slightly harder to curl. 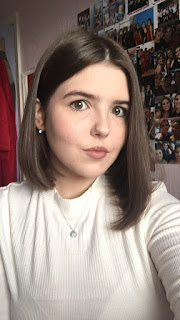 I have also had my hair more naturally, with my hair this length the end slightly flicks, the majority in the right way however due to me sleeping on it or the way it dries some bits, mainly the bottom layer will flick outwards which doesn't look awful but if I am going out I prefer it to flick inwards rather than outwards. It's such an easy hairstyle to do and takes like two minutes to do, as I just use the straighteners to flick my hair inwards. I think it is such a simple look but it is super cute and really good for a simple everyday wear. 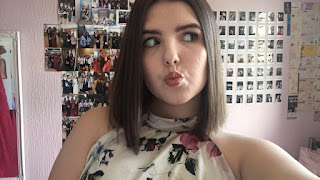 Another hairstyle I have been wearing and is probably my favourite hairstyle is just wearing it straight. Before having my hair cut short my go to hairstyle was just straight hair and I've wore my hair straight for so many years, and although a few years ago I stopped wearing it straight before I got it cut short the first time as that summer I did like two or three months without using heat, it could have been longer and then when I did get it cut last time I preferred having my hair wavy or in lose curls so hardly ever wore it straight. But, for the majority of the time over the past two years I have wore my hair straight and I personally think I suit straight hair over curly or wavy or anything. Another reason why I love wearing my hair straight is because for me it literally takes two minutes, I naturally have kind of straight hair especially when I had long hair, so it is the easiest hairstyle for me to do. 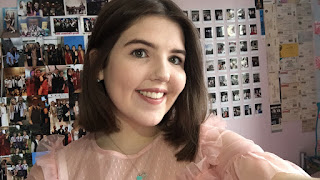 When my hair is curled or straight or like just flicked under I do end up putting it behind my ear. Putting hair behind my ear is something I automatically do and cannot help it but I kind of like the way it looks so I don't really care either, but that's how I've been wearing my hair. I've obviously always tucked my hair behind my ear but this school year I started doing it for my actual go to hairstyle for multiple reasons. The main two reason why I started to do it was one because I was getting annoyed of wearing a braid to keep my hair back everyday and still wore my braids sometimes but not all the time and two it was just so much easier and by the end of year eleven I would literally spend five minutes on my hair and that's it and that is another reason why I got it cut.
As well as wearing my hair behind my ear, I also have been wearing it kind of half up half down like in a man bun, mainly because I cannot tie my hair up. The half up half down hairstyle is probably one of my favourites because my hair is off my face, but there is no pictures of that because normally when I wear it I look awful.

So, that's everything about my hair, I am sorry if it sounds weird, I feel like I just rambled on but I wanted to share with you my new hair and just talk about it.
I hope you enjoyed it.