Hey guys,
today's post is going to be focused on concerts. I have been to 19 concerts, and I have two more this week, I thought I would share with you some of my concert essentials, and also some tips for when you go to concerts, so here are my essentials. 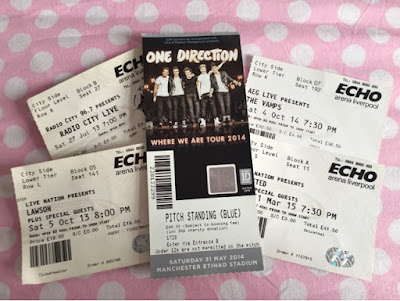 Tickets
My first concert essential, one that you will definitely need if you want to go and see this concert, and that is your tickets. I get my tickets sent to my house, so I have to remember to get them before I leave for the concert, since I normally go concerts with my older sister, she is the one who will look after the tickets until we get there. However, you can actually pick up your tickets from the box office, if you are doing this I would say get to the arena either a bit earlier or a bit later/ after the doors are open, as most people go and pick up their tickets when doors open and that sometimes means that the queue to pick up your tickets is nearly as long as the queue to get into the arena, and that is a lot of waiting. Also, if you are picking up your tickets remember to bring the card you bought them with, otherwise you may not get them tickets. 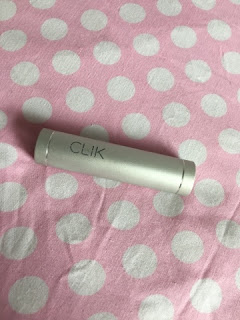 Portable Charger
For me, this is a must have for concerts. Even if you think your phone is going to last the whole concert without running out of charge, I would just recommend you take a portable charger with you, just in case. For some concerts I leave to go midday and I will spend the day in the city where that concert is taking place, if that is the case I definitely take a portable charger with me because I am always on my phone, and I know it would not last 1pm till 11pm when I get home. 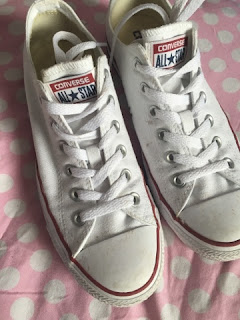 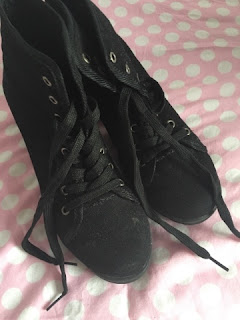 Shoes
Obviously shoes are an essential, because you have to wear them, but it is the shoe choice that I am on about, because that is an important decision. At a concert 99% of the time you are stood up, and you don't really want your feet to hurt, although they most probably will no matter what shoes you wear. Converse are a great shoe choice, I would always wear converse for concerts, mainly because they're flat and comfortable, but every concert I have been to since last year, I have wore some type of boots. I would recommend converse if you are standing at a concert, and I mean if are going a concert where there is a standing area, and you have no seat, converse are the best option, for example when I went to see One Direction, the 3rd time, on the Where We Are Tour I had standing tickets, and I was in the front block. I was queuing from like 2pm, and in the queue we sat down, but when the gates opened at around 5pm and we went to our block, I don't think I sat down, I was stood from then until the end of the concert, so converse was a good option. 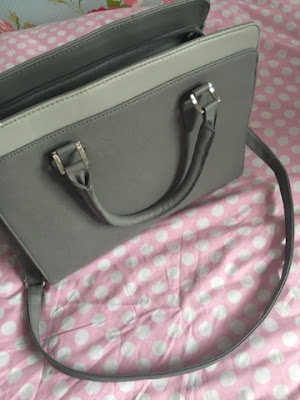 A Bag
You don't need to take a bag, but I think it is good if you do. I normally don't take one if I am just going the concert and not spending my day in the city, but my sister does so I put my stuff in her bag. There is room for bags at concerts, so it is an option, you can put it under your chair, or when standing on your chair. If you do have standing tickets, you can take a bag, for One Direction I did, however in my bag I did take food, as we were there all day. 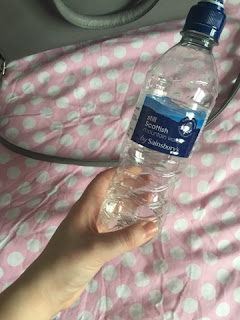 Water Bottle
For me, I think this is an essential, any drink is at a concert. You will most probably have to buy your drink there and if you have a drink in your bag, they will bin it. But, a drink if very important at a concert, if you are singing a lot, like I do, your throat may become really dry, so you will need a drink, and you will definitely need a drink if it is outside in the summer. 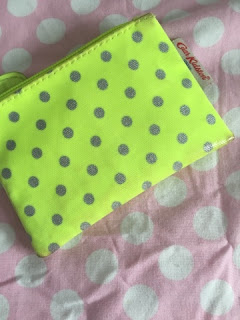 Money
This is optional, if you are not going to buy anything there, you may not take any, but I think just take some just in case. I always buy tour programs, as I collect them, so I normally take money for that. 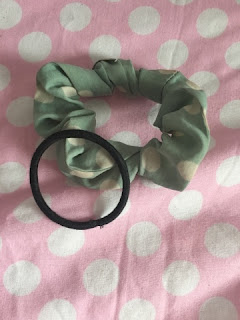 Hair Bobbles
Again, this is optional, but I think it is always good to have a bobble with you, just so you can tie your hair. I know at concerts, if I am singing and dancing, my hair can go horrible, or it can just go everywhere and I will just tie it up to keep it off my face and stop it from annoying me. 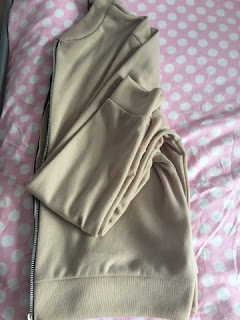 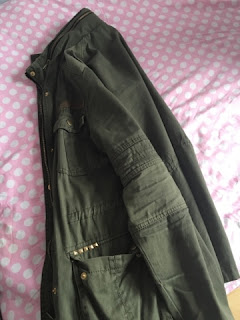 Jacket
This is more for after the concert. Yes, it may be warm when you are waiting to go in, but when the concert is over and you are outside, it could be freezing, I know it was the other day when I went to see Little Mix. I wouldn't say take a big coat, just take a jacket, I have a really thin beige bomber jacket from Boohoo, and with something like that you can just throw in into your bag. I also have this green one from New Look, and I've been wearing this recently, as it hasn't been freezing, but it hasn't been too warm either, so that jacket is perfect for this weather. 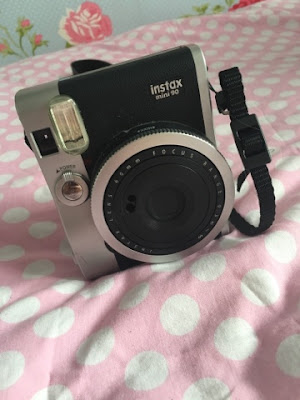 So there are all my concert essentials, now I am going to share with you some tips about going to concerts, mainly about the outfits you could wear.
I'm sorry for how bad these pictures are, they are from blog posts I did nearly two years ago, and last year, but I am just going to go through the outfit and tell you if it was a good idea or not. 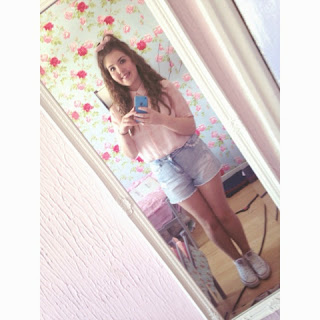 One Direction, Where We Are Tour
(31st May 2014)
This was the concert I was on about before, where I was stood up. It was a stadium concert, so it was outside and it was at the end of May, so it was nearly summer, and it was nice weather. Since it was outside, this outfit was a good idea, as I was not too warm and I also had converse on so my feet did not hurt. I would recommend wearing something like this, if you are going to a concert in the summer and it is outside or in a stadium. 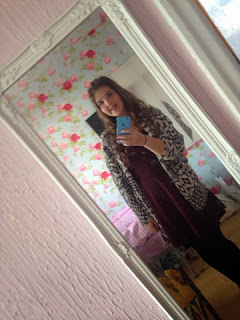 The Vamps Meet The Vamps Tour
(4th October 2014)
You can't really see what I am wearing on this picture, but it is awful, if you go back to my posts in October 2014, you will see a clearer picture of the outfit, but I could not find it. This outfit was not very practical for concert, especially as we spent the majority of the day in Liverpool and it was in the middle of October, and the dress is both low at the front and back, so I was freezing and I has to keep pulling it up as it would go too low, the cardigan was no help either. I only warmed up when we got inside and I had my tour top on. The shoes I wore also hurt my feet, I think I wore boots and they killed my feet, so once we got into the arena, I took my shoes off and put socks over my tights and only put my shoes on at the end. So as you guess, I would not recommend wearing a dress like this for a concert, also you spend a lot of the time pulling the dress down at the bottom, as it would rise when my arms where in the air. 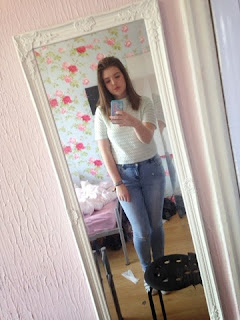 The Vamps Tour
(25th April 2015)
This is most probably the best outfit out of all of them, a pair of jeans, a nice top and my caged sandals that I was obsessed with last year. Since it was April I just took a leather jacket with me and it did rain that day, but other than that it was not cold, so I was fine.
This is the type of outfit I would recommend for a concert, just a pair of jeans, a nice top and just some converse or some boots.

I hope you all liked this post, I really enjoyed writing it, comment down below your concert essentials and your favourite concert you have been to.
Also, I am going to see The Vamps twice this week, on Tuesday and on Saturday, would you like to see a post on them concerts and what I wore for them on Sunday?
Also, at the end I will link all my concert posts, in case you want to read them, and see what I wore for them.
Love, 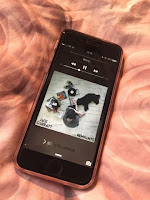