Hey!
Today's post is going to be my opinion on some of the fashion choices of celebrities at the Teen Choice Awards this year, I know this is a week after the awards, however I did this blog post last year and thought I would do it again. 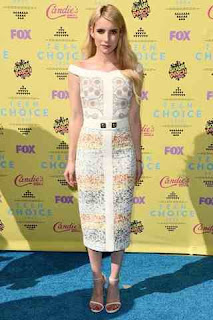 Emma is wearing a Peter Pilotto Resort dress, and I think it is really pretty. The dress is very classy and look lovely on her and suits her figure very well. I also like the way she paired it with a neutral makeup look, with a nude lip, that I am in love with. 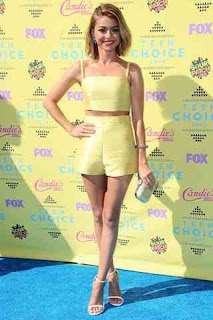 I think Sarah's outfit might be one of my favourite outfits from the event. I love the two piece, a lovely bright yellow crop top and high waisted shorts, I think it is super simple but very stylish and I am just in love with it. Her hair also is so nice, I love length of it! 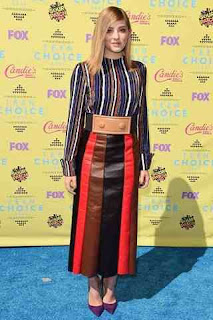 Sadly, I don't like what Willow is wearing, again. Like last year I think the patterns don't go and it just doesn't look nice. I also think it makes her look a lot older, but not in a good way, she doesn't look like a 15year old, at least last year she did. 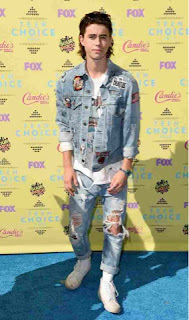 I really don't like Nash Grier, at all, and I also don't like what he was wearing, he just look a mess. Also, some people look nice with their hair growing and being long-ish, however he definitely doesn't, it just looks like it needs a cut and a good wash. 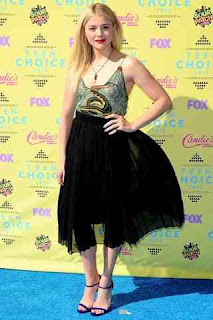 I am unsure about what Chloe is wearing, I think it is cute and very relaxed looking, however I really don't like the snake on the top part of the dress. I normally love what she wears. Her hair and makeup looks really nice though! 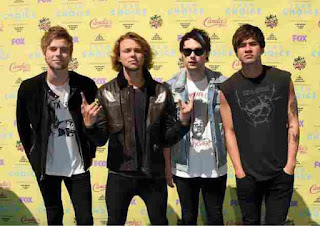 Of course I love what 5SOS are wearing, because they are 5SOS and they always look amazing! We will go from left to right, on what I like about what they are wearing.
Luke; I love what Luke is wearing, I always do! (If you didn't know Luke is my favourite and I think he always looks amazing!) I also like Luke's hair, at first when he started wearing it like that I didn't like it that much, however I like it now, and I like it better than when he wears it really high.
Ashton; I think I like what Ash is wearing the least, I really don't like the jacket he is wearing, I just think it is horrible. Ash's hair I am unsure about, it is better that when he wears it in a bun, but I do muss Ash's old hair when it was short and curly.
Michael; I really like what Michael is wearing, because I like it when he wears denim jackets, I just think they look so nice on him. Now, Michael's hair, I like it but I do prefer his hair red.
Calum; I also like what Calum is wearing, and always do, he always look great! I like that he is wearing a block top with black jeans, and it looks fine, because I normally don't like it when people do that because the black is normally different shades, but it looks amazing on him. 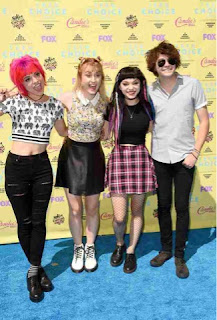 Before I talk about what I think of what Hey Violet is wearing, I think I should tell you who they are for those who don't know who they are. Hey Violet are a band from LA, America, they are signed to Hi or Hey Records (5SOS' record company) they are currently supporting 5SOS on their Rock Out With Your Socks Out world tour, and when I saw them on the ROWYSO tour and didn't like them a lot, but they are alright.
Now on what I think about what they are wearing, from left to right:
Nia; I don't really like what she is wearing, for a award show, for a concert fine but for an award show not really, and I know I have saw her wear this on twitter for a concert.
Miranda: I am unsure about this outfit, because yes she looks nice, but maybe a bit too casual, I also don't really like the shoes or skirt she is wearing.
Rena; I think Rena looks the nicest out of all of them, but again she looks like she is going to play a show and not be at an award show! But I do really like the top.
Casey: Again, another outfit you would wear for one of their shows, though he most probably could get away with wearing this for an award show. 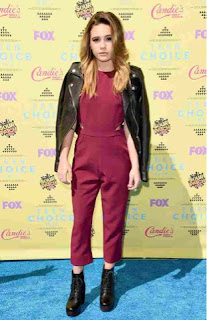 I love Bea Miller, and think she always look amazing, she was one of the reasons why I got my hair cut short, because her hair was lovely short. Now, onto what she was wearing for the event, I think she looks stunning, I love the jump suit, it's very plain but in a good way and I love the way it looks on her. Also, I really want the boots she is wearing they are just so pretty! Her hair, like always, is just beautiful, she can never look anything but amazing! Also, if you are wondering her boots and jumpsuit are both from Topshop. 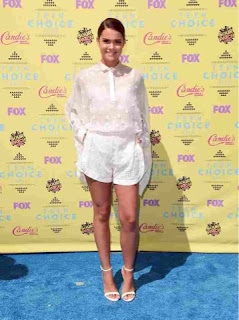 Again, I really like what Maia is wearing, I think it is very subtle and girly and pretty, and I think that is because of the white. I think the crisp white of the shorts and blouse make it look very clean and simple looking, and her hair also looks very clean and crisp by the way it is all sleeked back and very neat. 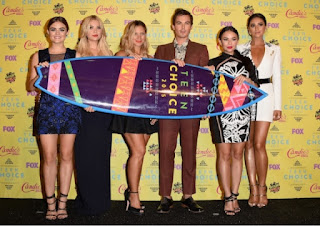 I couldn't find a single picture of Tyler or Ashley, though I have saw what Ashley was wearing and it was lovely, it was a simple full length black dress with a slit on one leg, and she looked stunning. You can kind of see what Tyler was wearing and I like it, I really like the suit, it's brown and different, because you don't really see that many brown suits, he looks very handsome I think. Now onto the ones who I could find single pictures of. 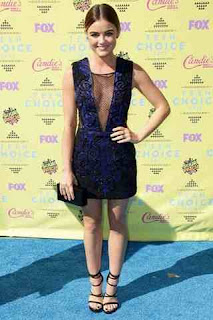 Unlike last year I like what Lucy is wearing, last year I was unsure on the red dress, but this I like. Lucy is only around 5foot1 but I think this dress makes her look a bit taller, and I know she is wearing heels but she looks taller. The dress really complements her size and figure and I think she looks gorgeous. 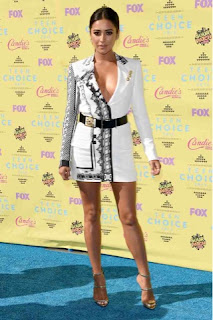 Lets be honest Shay Mitchell always looks stunning, no matter what she is wearing, and at the Teen Choice Awards she again looked stunning. She is wearing a suit dress, so kind of like a blazer with a belt, but it looks amazing any way! I like the way she hasn't paired it with any accessories, except for earrings, because I feel like the dress is bold enough on its own. 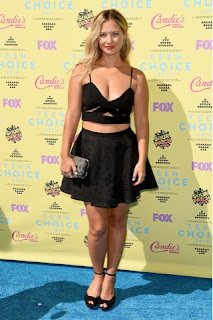 Of course Vanessa Ray had to be at the Teen Choice Awards this year and she actually won an award! She wore a black crop top and skirt, and I like to think there is a reason for her wearing black, there might not be, but I like to think there is. I think she looks pretty and casual, it wouldn't be something I would wear for an awards show. 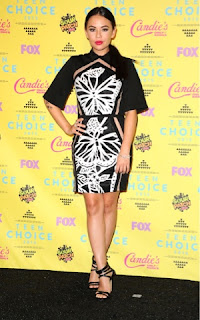 I love Janel, I think that might be because Mona is my favourite! I also love what she is wearing, I think she might be best dressed for me. I just love the simplicity of a black and white dress, it is just so pretty. Janel is wearing a VONE Butterfly Effect 606 Dress and I love it!

So that is what I though of the Teen Choice Awards fashion of this year, my best dressed was Janel Parrish and my worst dress I think is Willow Shields or Nash Grier!
Comment what you though of the Fashion at the TCA this year!
Last years post:http://ailishelizabeth.blogspot.co.uk/2014/08/teen-choice-awards-2014-fashion.html
Love
Ailish Elizabeth
xx
Twitter|Instagram|tumblr|bloglovin|Twitter