Hey, guys.
Today I am going to be doing a film review and hope you all enjoy it.
On Friday the new Beauty and the Beast film came out and I was super excited to go and watch it, so last night me and my older sister went to go and see it, and to sum up how I feel about it, I love it!
Beauty and the Beast has always been my favourite Disney film since I was litte, with Belle being my favourite princess, I think it was mainly due to her loving books and I have loved reading since I was little and still do today. When I heard they were releasing a new Beauty and the Beast I was so excited and could not wait for it to come out, however, as it go nearer and nearer I did start to worry due to it being my favourite film what if they ruined it and made me hate it, which luckily they did not.

Firstly, I am going to talk about the casting, I thought the casting was perfect. Emma Watson plays Belle and to be honest I was not worried over that as I knew she would portray Belle perfectly and I loved Emma Watson before watching it and I love her even more now, she is such a fantastic actress.
Mrs Potts was also played by an Emma, this time Emma Thompson and this did worry me. I think Mrs Potts is such an important character in the film and I didn't know if Emma Thompson would be able to play her as good as the original and also in the trailer I didn't really like the look of Mrs Potts, However, I had nothing to worry about as she played her amazingly and I do now like the new Mrs Potts look,
Other actors who are in the play are Dan Stevens playing the Beast, which I thought he did a really good job and you could tell it was him but you also couldn't, if that makes sense. Luke Evans played Gaston and he was such a good choice to play Gaston because he just looked like him and he acted like him and you automatically didn't like him, but in a good way. Josh Gad played LeFou and he definitely brought the comedic side to the film and for those who don't know he plays Olaf in Frozen and because I knew that every time he spoke I would just think Olaf. The final cast member I am going to talk about is the newcomer Nathan Mack who plays Chip and this was his debut and he was just amazing, Chip is one of my favourite character in Beauty and the Beast, probably my favourite after Belle, so again I was worried over this and in the trailers I thought he sounded to posh/ fake British but in the actual film he doesn't and I love the new Chip as much as I love the old one.

The actual adaptation of the film is so good and it reflects the original so well, although it isn't identical. My favourite scenes from the original are still my favourite scenes so the village scene of Belle singing, the library scene and the ballroom scene. Also, the scenes I disliked in the original are still the ones I dislike, and that is not because they were awful, it's because when I was younger they would kind of scare me, they are the scenes when Maurice is being attacked and also when they are all horrible to Maurice. Also, my emotions were everywhere whilst watching the film, I think I mainly got emotional because I was so overwhelmed by it all, Also, it was a bit upsetting a times and I like one or two tears escaped my eyes, but there is one point in the film when I had tears actually flowing down my cheeks, I am not going to tell you what scene, but if you've seen it tell me if you know what scene it is that made me cry.

The music made the film, including the background music but also songs they sang. All the songs from the original were in it and were sung perfectly but also there was a song called "Days in the Sun", which probably one of my favourites and I think that was one of the songs which caused a few tears. Also, Emma Watson's voice is amazing!

Overall I thought it was one of the best films ever and it was such a gorgeous film too, it just made me so happy watching it. Also, I have been Disneyland Paris five times and there were parts in the film which just made me feel like I was back at Disney and I mentioned it to Niamh and she agreed with me, it reminded me of the parades and the magic of it.

I hope you all enjoyed this review and you all need to go and watch it, if you have not already seen it. I'll leave you with a picture of me and Niamh with Belle and the Beast (Adam as he is in human form) from when we were little in Disneyland Paris. 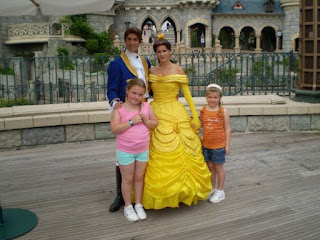