Hey guys, I am finally back with a new blog post. I would just like to apologise about not uploading a new post last week and also the lack of blog posts going up this year, however I have finally finished school for summer, so hopefully in these six weeks off I can get a lot of posts up, wrote and scheduled, however, I would greatly appreciate it if you would comment any posts you would like to see on my blog this summer. Also, the main reason why I haven't been posting is because of school and during in the last weeks I have been doing bits of work I wanted to finished before I finished school for the summer, for example last weekend I didn't post as I had biology coursework that I wanted to finish. With that said, now onto today's post. 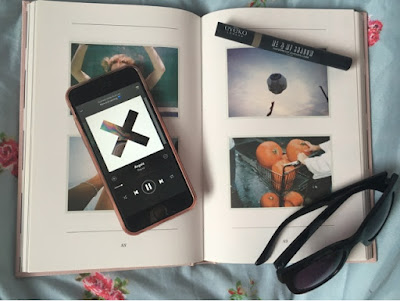 One of my favourite posts to write is my monthly playlist post, and that is what I am going to be doing today, I will be sharing with you some of the songs I have been loving this month, and I will leave a link to the song and also the playlist at the end. So here are some of my favourite songs of this month.

Viola Beach
~Boys That Sing
(https://www.youtube.com/watch?v=LrhRlCf_NJM)
~Swings and Waterslides
(https://www.youtube.com/watch?v=_wna_Rf4wdg)
I mentioned Viola Beach and these two songs in my June favourites, and I am still in love with these two songs, and can't wait for their album to come out. As I mentioned in my favourites, this band were actually in an accident in February and sadly died, so their family are releasing their album. For those wondering they were an indie rock band and their music was just so good and their songs are really catchy.

Angel Snow
~Secret
(https://www.youtube.com/watch?v=RbpbXB93Cl4)
To be honest, I have no idea where or when I first heard this song, it just appeared on my playlist, and I am happy it is on it. It is a really nice song, and that is kind of all I can say about it, because it is one that just breaks up the songs in the playlist,  also I can't tell you much about the singer, I first thought it was a band, but I have just found out it isn't, and that is all I really know.

Nat and Alex Wolff
~Last Station
(https://www.youtube.com/watch?v=jyoTbu4CUCk)
This was in the discover playlist the other week and I listened to it and fell in love with it, and added it to my playlist straight away. I was a huge fan of The Naked Brothers band, so obviously I am going to love Nat and Alex Wolff and the music they have done.

The 1975
~She Lays Down
(https://www.youtube.com/watch?v=DKEM3k8Nwdg)
~She's American
(https://www.youtube.com/watch?v=QFYiOtjB608)
I am a big fan of their new album, especially She Lays Down, I think it may be my favourite off the album, and it is just a really nice soft sounding song. Which is a contrast to the second song by them on my playlist, which is She's American, which I think is Niamh's favourite song off the album, and it is one that you just want to sing along to.

Calum Scott
~Dancing On My Own
(https://www.youtube.com/watch?v=q31tGyBJhRY)
I was a fan of Calum Scott when he was on Britain's Got Talent last year, and I really liked his version of Dancing on My Own, and he has released it, and everyone is loving. Out of all the covers he did last year on BGT, this was the best and I think he amazed everyone with it.

James TW
~When You Love Someone
(https://www.youtube.com/watch?v=0Bf3CJZ4hvg)
I had heard of James TW, as I think he may of supported Shawn Mendes once, but I am not too sure, but I had never heard anything by him. This song was also in my Discover playlist, and got added to my normal playlist, as I thought it was a really nice song, and I don't know why I really like it because it doesn't really apply to me, the meaning behind the song, but it is the same with Broken Home by 5SOS, I really like that song and I don't know why. I think I am going to have a listen to some of his other songs and see what they are like and see if they are going to get added to a playlist of mine.

5 Seconds Of Summer
~Girls Talk Boys
(https://www.youtube.com/watch?v=0MXldocLfu4)
For those who don't know I was a big fan of 5SOS, and I have saw them 3 times, however I kind of like their new music, but I am no longer like a big fan of theirs and didn't go to this tour, however this song, me and Niamh love it and can't stop listening to it, it is so good, so if you haven't heard, go and listen to it.

ZAYN
~wHo
(https://www.youtube.com/watch?v=JCvXqL7OFGs)
I again am a big fan of One Direction, and cried when ZAYN left. I wasn't happy and I was telling myself I wasn't going to like his new music, I actually like his solo music- especially this song and I can't stop listening to it. It is for or from the new Ghost Busters film and it sounds like old Zayn and One Direction.

The XX
~Angels
(https://www.youtube.com/watch?v=_nW5AF0m9Zw)
~Reunion
(https://www.youtube.com/watch?v=Xc-oGWPlFVA)
Angels by The XX is probably one of my favourite songs ever, it is such a pretty song, one of the first times I heard it was in a tv program called The Crash, which was really good, but so emotional and Angels was played during one of the many emotional parts, and I think I was around 12 and was crying so much watching it and now the song reminds me and Niamh of the crash and Niamh hates listening to it. Reunion is another grate song by The XX and again is beautiful and if you haven't listened to The XX, you should.

Shawn Mendes
~Treat You Better
(https://www.youtube.com/watch?v=lY2yjAdbvdQ)
I love Shawn Mendes, like everyone else, and I also so love his new single. If you listened to old Shawn, like Life Of the Party, One of Those Nights, Show You or The Weight, do you think this sounds like them? I think the main reason I love this song, is because it sounds like old Shawn and those four songs and kind of my favourite songs by Shawn, especially Show You and One of Those Nights, and they remind me of Summer and I think this song will too.

I hope you liked this, and I now should be back to weekly post, at least, maybe some midweek posts too.  Remember to comment blog posts you want me to do, and some of your favourite songs. Also, I really want to do another What's On My iPhone, as my last is my most read post, would you want me to do another one?