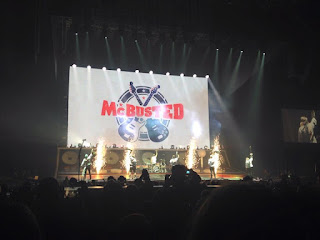 2~First song you heard?
The first song I heard by McBusted was of course Air Guitar.

3~Have you ever seen them live?
Yes, I have seen them live, I have saw them twice, at the OMFG tour as well the Most Excellent Adventure tour (MEAT). Both the times they were mine and Niamh's birthday presents off my Mum and Dad. The first time I seen them our seats on the upper tier and a bit far back, but we didn't mind because they sold out so quickly, we were just happy that we had tickets. Then the second time, our seats were amazing, they were floor level, block A, row S, so that was the front block and 19 rows back, and the end of the row going into the middle. So, me and Niamh just thought we would be the back of our block, far from the stage, however since McBusted have the OMFG zone, the stage comes out further, so we actually where only like five rows back from the end of the stage, what was so good, because you felt you were more of a part of the concert and since we where that close they could actually see us, and the pictures were amazing!

4~Have you ever met them?
Sadly, I have never met them, the radio tour for Air Guitar I was either in school or busy and couldn't make it. Then the first tour we couldn't go early and wait outside the car park and try and meet them (what we do for some of the concerts we go) because it was the day before Easter, so we were getting ready for that, by baking and we couldn't wait after the concert because the next day was Easter and it was going to be a busy day. Then this year (second time we saw them) we couldn't wait before the concert because we had school and wouldn't of been ready in time and couldn't wait afterwards because we had school the next day!

5~Are you followed by any of them on twitter?
Yes, James follows me on twitter, he followed me about a week before the first tour, he tweeted about it asking who was excited, and I tweeted back and he followed me! I was so happy, and that day I was going out with friends and I walked into my friends house and the first thing I said to her was "James Bourne follows me!"

6~Favourite song?
I love all the songs on the album, but my favourites have got to be Before you Knew Me,  Beautiful Girls are The Loneliest and What Happened to Your Band, as well as Riding on My Bike, I love this song, for some weird reason, there are multiple videos of me dancing to this song and it is like an actual dance routine, I do it nearly every time I listen to the song. I love it preformed live as well, especially when Danny and Matt ran around the stage and Matt came on our side, it was like the first time during the concert and I screamed so much!

7~Do you have any merch/posters?
Posters, no, but merch, yes! I collect programs so I have programs from both the tours, I also have wrist bands, I have one from the OMFG tour that I took off a couple of days after the tour, and I also have one from MEAT that I still have on and can't take off and I've had it on since the end of March so around four months.

8~Who is your favourite member and why?
That is such a hard question. My favourite member of McFly was always Tom growing up, from when I was little till around two or three years ago, when I suddenly loved Dougie and he became my favourite, but then Tom posted his wedding speech and he became my favourite again, and I made watch it and I made my RE teacher put it on in our lesson, but my love for Dougie was still there, so my favourite out of McFly is Dougie and Tom. Then, Busted it is so easy, my favourite is Matt, I love him! Everyone sat around me last time I saw them, would know how much I love Matt, because every time he sang or came to our side of the stage I would scream! So, my favourites are Tom, Dougie and Matt.

9~Were you already a McFly/Busted fan and when from?
Yes, I was a fan of McFly and Busted before McBusted, mainly McFly though. I was a fan of McFly from the start, even though I was like 3, I loved them. Mine and Niamh's (more Niamh's as she bought it) was Room On The 3rd Floor. I was a fan of Busted and like and knew a lot of their music, but I was more of a McFly fan!

10~Favourite McFly/Busted song?
Again, this is another really hard question, as I love a lot of their songs.
McFly songs, when I was younger my favourite was Room On the 3rd Floor and Broccoli and I still love both of these songs so much, I also loved Five Colours In Her Hair, me and Niamh could dance to that all day, I love it, the amount of dance routines me and Niamh had to that is unbelievable (especially because we both can't dance.) I still love them songs and some of my other favourite songs by McFly are Party Girl, Bubble Wrap, I love Transylvania, as well as All About You, that was my song when I was little and would change the words to All About Me. I also love, Lies, Cherry Cola, The Heart Never Lies, One For The Radio and finally Sorry's Not Good Enough (When listening to it I always in my head change it to Thank You's not good enough, from Tom's wedding speech.)
Busted songs, I don't think there are as many songs that I love, obviously Sleeping With The Lights On and 3am are my favourites, and always have been and always will be, I was so happy they sang 3am on this tour.
I also love What I Go to School For, You Said No, Who's David, as well as Britney and Thunderbirds Are Go and Nerdy!

So, they are my answers to the McBusted Tag, if you love McBusted also please do the tag and leave me a link to your post or just answer some of them in the comments, I really hope you liked it, also as I said in my last blog post if their blog posts or blog post ideas you want me to do this summer please leave them as a comment, because I have now finished for summer and have around about 6 weeks off so I will carry on doing Sunday blog posts, and maybe mid week ones too!

Here is a link to one of my first blog posts, from last year when I talked about the OMFG tour and McBusted in general~ http://ailishelizabeth.blogspot.co.uk/2014/04/musicmonday-mcbusted-ailishelizabeth.html

Also, here is a link to Emily's video of her doing the Tag, go and watch it and subscribe to her, she is amazing I love her vlogs as well as her normal videos!
https://www.youtube.com/watch?v=71geCHTkxyA