End of an Era| Ailish Elizabeth

On the 23rd June 2017, I wore my uniform for the last time and walked into my secondary school to sit my final GCSE, and now I am finished with my secondary school education. I can't believe that I have actually left school and will no longer have to wear my ugly uniform ever again, it's not the end of me waking up early and getting ready to learn as I am going to college in September.

For those who follow me on twitter or instagram you would probably already know that I've finished school as I've posted a few insta stories and pictures about it and also I've been tweeting a bit of a countdown on twitter.

Also, if you follow on instagram you might be a bit confused as I put up pictures around two weeks ago, with "leavers" as the caption and yes, I did technically leave school 2 weeks ago on the 9th of June 2017, but that is the day I went on study leave and I've still be going in for exams and some lessons, so I hadn't fully finished until Friday when i sat my final exam!
The picture below is my leavers book which I got my friends and some of my teachers to sign and write messages in for me, the bottom of my blouse which I wore for leavers and got signed and then also some polaroids from leavers. For those who are confused about leavers it's basically the last day for year elevens and we have an assembly and sign each others shirts and take pictures, my book I've had for weeks. 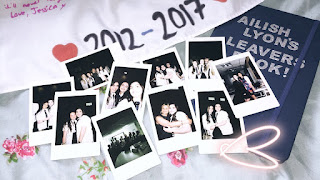 As I have said, I didn't actually leave school for good until Friday and I had a morning exams and it was my Physics further additional exam and although I hate physics I really enjoyed that day. After the exam me and one of my friends Jess walked around to see some teachers and say goodbye and give them cards and then we left to have a... paint fight. A paint fight is a normal way to en year eleven, I think, it's just you and your friends ruining your uniform which you have had to wear for five years, and it was so fun. It was only my science class who did it, as we were the only ones who had an exam as the majority of the year had finished the Friday before. Even though there was only a few of us, it was so fun and the picture below is just me covered in pain and it might not look like I've got a paint on me but I did especially my back and hair.

It feels so weird to have finished school and to have been doing revision and work for my GCSEs for two years and now have nothing to do really, I have so much time. I really want to do a lot of posts this summer,  starting this week. I am planing on doing a year eleven review/ summary which might include some Prom pictures and also I might do a look back on my five years in secondary school. So, look out for them and I hope you enjoyed this quick post just keeping you up to date on my life.
Love,