What's On My iPhone 5c|AilishElizabeth 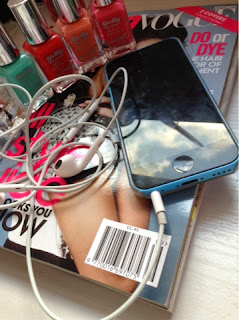 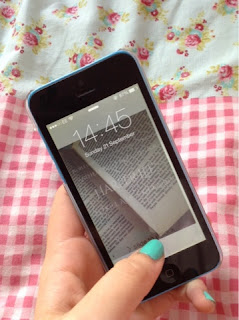 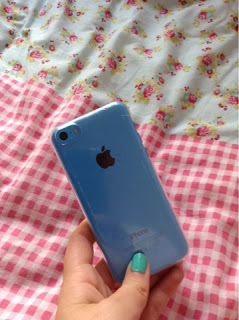 Hey guys! Today's post is going to be something I have been wanting to do for a while and finally have gotten around to doing it and that is... What's On My iPhone! I love watching these types of videos on youtube and saw a couple of people do it on their blogs and hey why don't I do it.
I have the iPhone 5c in blue, I got this for Christmas and love it, I have got a clear plastic case on, that doesn't really protect my phone but does at the same time. 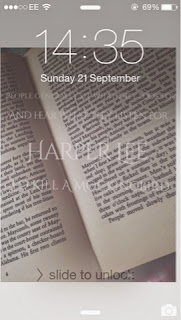 This is my lock screen, my lock screen is a picture of a page out of To Kill a Mockingbird and put one of my favourite quotes on there, that is
"People generally see what they look for
and hear what they listen for" 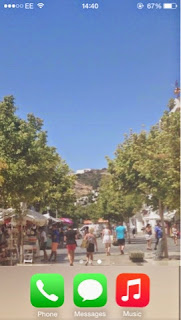 My home screen picture that I took when I was in Portugal of the Old Town, that I thought looked really pretty so I set it as my home screen. 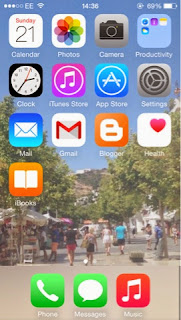 On the first page on of my phone it is just that come on your phone, Calendar, photos, camera, a folder called Productivity, Clock, iTunes store, App stores, settings, mail, health and ibooks.
Then I downloaded Gmail so I can check my emails and Blogger so I can edit and write my posts.
On the bottom part of the screen I have phone, messages and music, my music just has One Direction, The Vamps, 5SOS ect. 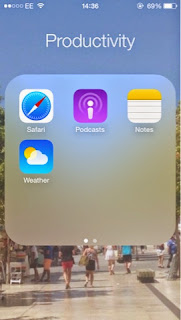 On the first page of the folder I have the apps I use, safari, Podcast (what I'm currently using now), notes and weather. 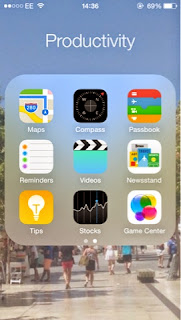 Then on the second page I have maps, compass, passbook,reminders, videos, newstand, tips, stocks and game center. 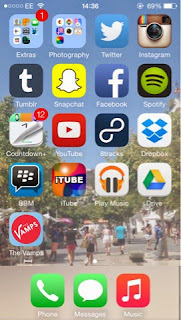 On my second page I have all the apps nearly every single day.
I have two folders on this page, the first is Extras. 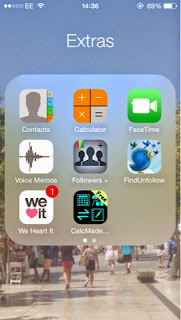 In the Extras I have Contacts, Calculator, facetime and voice memo, I don't really use these apps that much.
Then the apps I have downloaded are
Followers+- This is where I can check who has followed and unfollowed me on Instagram.
Find Unfollower- This the same a Followers+ just for Twitter.
We Heart It- This just has a lot pictures on for you to save and use.
Calc Made Easy- This is another calculator but is scientific. 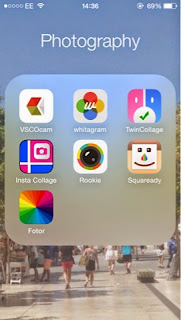 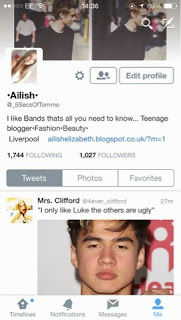 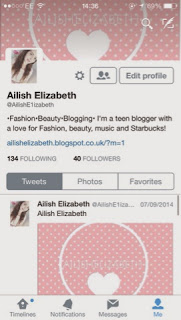 Tumblr- My next app on my phone is Tumblr, I also love Tumblr, when I'm bored this is where I am, I literally be on Tumblr for hours, if you want to follow me on Tumblr it is dreaming-daisyx. 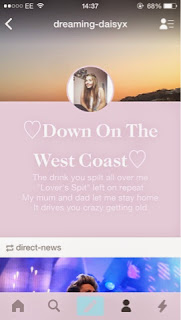 Snapchat- Again Snapchat is another one of my favourite apps, that I go on when I'm bored again.

Spotify- I love spotify, but I don't use very often anymore, but still love it, however hate the adverts.

Countdown+-  Countdown+ is what I use to countdown to events like, my birthday and concerts and Christmas. 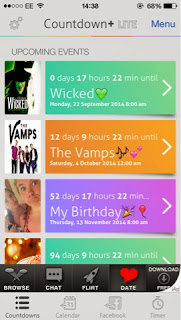 8tracks- 8tracks is an app that has thousands of playlists that people have created and you can listen to, I mostly listen to covers on it though. 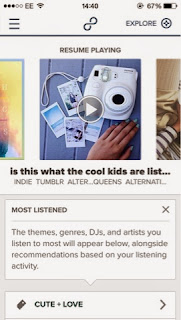 Dropbox- Dropbox is an app that you can save all your pictures and videos to, however I always forget to.

BBM- This is just a messaging app that I use around once a month because i only use it if I have someone on there and I don't have their number but need to text them.

iTube- iTube is just another app that I use to listen to music for free.

Play Music (Google Play)- This is just the same as spotify but is easier to use as my whole family use it and it is super good.

Drive- I'm not to sure what drive is, my Dad downloaded for me so I could save my Tech work and print it off.

The Vamps Flash- Again I don't have a clue what this is, The Vamps just tweeted the other day saying if you are going to the tour download it and use it at the tour, so I downloaded it.

That is all that I have on my phone, I hope you liked this type of blogpost.


Labels: What's on my iphone